Nesma Trading’s Technical Systems Division has been awarded the Advanced Research Computing Facility project by Saudi Aramco, located at Saudi Aramco in Dhahran. The project type is In-Kingdom Lump Sum Turnkey (IK-LSTK) and it is valued at SAR 94 million.

The scope of the 14-month project is to develop the site infrastructure necessary to support a total of 16 modular data center (MDC) units with entrance vestibules with six of the MDC’s installed in the initial phases at the EXPEC Advance Research Center at Dhahran.

The site development will include the supporting civil, structural, architectural, electrical, mechanical infrastructure requirements along with communication cables and storm drains.

Nesma Trading was awarded a project to replace the fire alarm and fire-fighting systems at Saudi Aramco communities through an In-Kingdom Lump Sum Turnkey (IK-TSTK) project valued at SAR 27 million.

This project was awarded to Nesma Trading by Saudi Aramco on January 30, 2017 and will continue for two years.

Nesma Water & Energy was visited by Saur Group, a French company specialized in water management and energy solutions. The group was represented by Jean-Philippe, CEO and Imad Alqahtani, Business Development Manager, as part of the French business delegation operating in the Saudi Kingdom since 2008.

The purpose of Saur Group’s visit was to exchange expertise in the field of water and assets management in addition to discussing potential future cooperation with Nesma Water & Energy.

Nesma’s scope of work in the project includes the development of KAEC’s IV2 infrastructure with an approximate area of 6.5 million square meters for water and power utilities in addition to roads and civil works.

As the main engineering, procurement, and construction (EPC) contractor in a 12-month project, Nesma faced several challenges during the IV2 Infrastructure works project. However, the NW&E team successfully overcame them due to the true dedication and commitment of its project team. 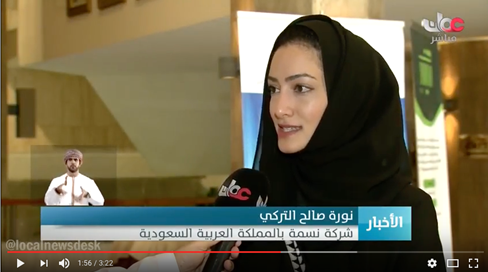 Under the title “Social Responsibility... Establishing Rights, Developing Work and Sustaining Growth”, the conference was organized by the Oman Chamber of Commerce and Industry in cooperation with the General Union of Workers in the Sultanate of Oman.

During the conference, Al-Turki shared Nesma’s experience in promoting labor rights and focusing on corporate social responsibility through a presentation titled, “The Saudi Experience.” Al-Turki explained, “Social responsibility begins with promoting the rights of your employees, providing them with a harmonious and welcoming work environment, and supporting talented employees’ career development.” 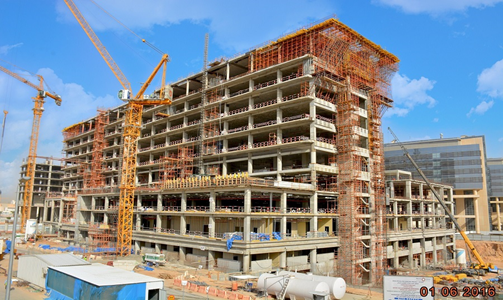 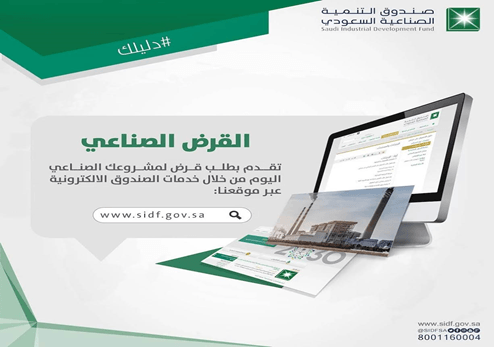 According to Yasser Abusamrah, Director of Information Services, NT&T, “Nesma divided this project into six stages executing sequentially. Each stage consisted of several steps of verifications, approvals internally and externally, and feedback from customers in order to maintain transparency and increase efficiency.” 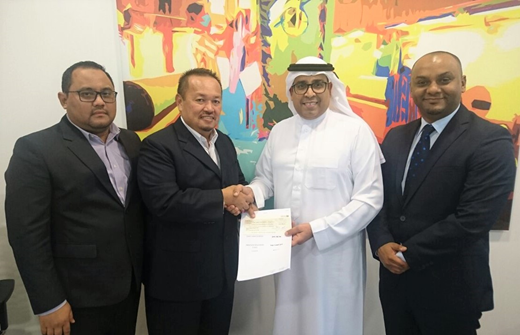 Mawaddah recently signed its first Hajj agreement with the Malaysian Hajj Commission for the accommodation of its pilgrims during 2017.

The company continues to grow its market share in Malaysia and the rest of the world for Umrah and Hajj.

Graduation of Safety Officers from... 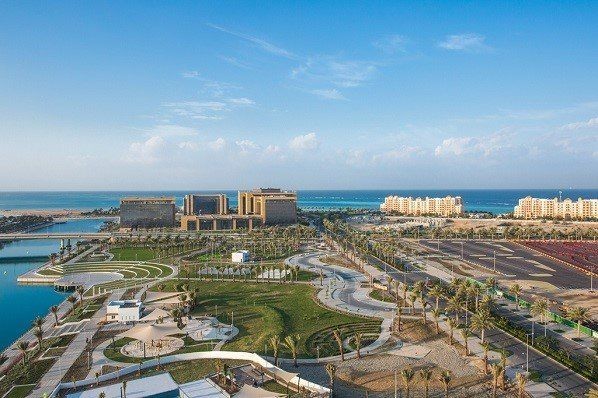 The GSM tower can serve all three network operators in Saudi Arabia (STC, Mobily and Zain). 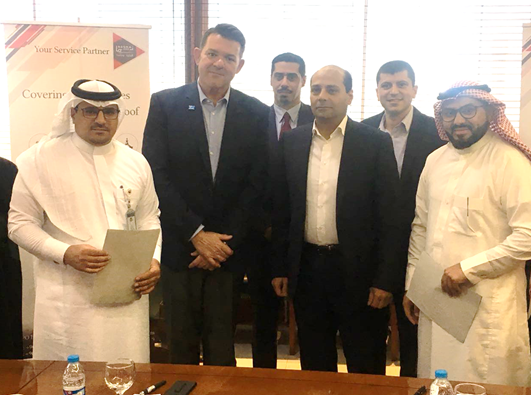 Nesma Trading signed an agreement with the Higher Institute for Tourism & Hospitality in Jazan to train 65 Saudis.

The program aims to support the nationalization movement and the duration of the training is six months ending with employment opportunities within Nesma Catering’s ongoing projects.

The Higher Institute of Tourism and Hospitality is the first specialized institute in the field of tourism and restaurant management in Saudi Arabia. 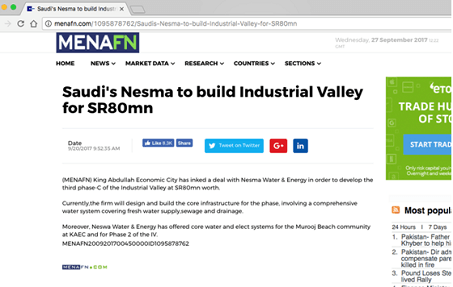 for working on the Industrial Valley project valued at SAR 80 million.

According to MENAFN’s online news portal, “King AbdullahEconomic City has inked a deal with Nesma Water & Energy in order to develop the third phase-C of the Industrial Valley. (http://menafn.com/1095878762/Saudis-Nesma-to-build-Industrial-Valley-for-SR80mn)Currently, the firm will design and build the core infrastructure for the phase, involving a comprehensive water system covering freshwater supply, sewage and drainage.”

It is worth mentioning that, the industrial Valley Phase 3 phase-C Infrastructure Works project is one of the largest infrastructure contracts offered to date by King Abdullah Economic City.

To become the project’s main engineering, procurement and construction contractor, Nesma Water & Energy (NW&E)competed against some of the largest names in the industry and secured the award by offering advantages in quality, cost and a trusted reputation. NW&E plans to complete the project within 500 days. 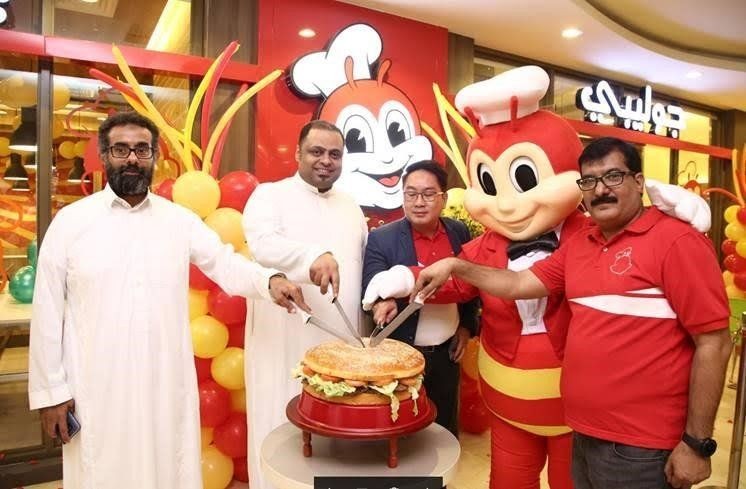 Jollibee Saudi Arabia celebrated the opening of its 13th branch in the Kingdom, located in the Baroom Center, Jeddah.

Jollibee is the most popular fast food chain in the Philippines with over 600 stores. Jollibee’s menu includes a wide selection of food including hamburgers, fried chicken and ice cream. It is endearingly known as the McDonald’s of the Philippines. 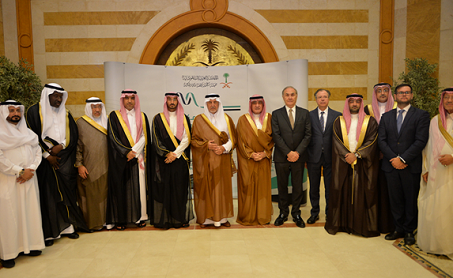 A consortium made up of Nesma Holding and Transports Ciutat Comtal (TCC), a Spanish transport company, was awarded a contract for operation and maintenance of Makkah Public Transportation Program (MPTP) buses, valued at SAR 3.1 billion.

His Royal Highness Prince Khalid Al Faisal, Governor of Makkah Province, and Nesma President, Sh. Saleh Al-Turki signed the contract which includes handling the supply, operation and maintenance of 400 buses for a period of 10 years. Under the contract, the consortium will start operating the Makkah public transport system after 18 months.

The project will provide public transportation service for all segments of the society, and to help transform and improve travel throughout the city while adhering to social, economic, environmental and traffic conditions, the Saudi Press Agency reported. The public transport system will be implemented as part of the Kingdom’s Vision 2030.

What do zombies and dinosaurs have to do with Nesma? A project completed by NDigitec for IMG Worlds of Adventure announces the arrival to Dubai of the world’s largest indoor theme park. The action-packed commercial brought to life by NDigitec showcases the strength of its premedia division, which incorporated a range of global brands and animated characters such as the Hulk, Iron Man, and the Powerpuff Girls for this ambitious project.

“The film is by far the most VFX heavy and advanced CGI-based piece of filmmaking to come from this region. I hear from people all over the world who have seen the commercial and love it,” says producer Daniel Sheridan.

The campaign was far-reaching, broadcasting on regional television outlets such as MBC and Cartoon Network (CN), running for 20 weeks in all major UAE cinemas, and entertaining passengers around the globe on Emirates Airline’s ICE network.

“When we first pitched our treatment, the client was blown away at our creativity, attention to brand, and ability to deliver such high-quality content,” says Executive Producer Nathan Ornick. “In this region, there are talented agencies, film production companies and specialized post-production companies, but when it comes to a single, integrated solutions provider for content from concept to color-correction, NDigitec is by far the best.”

The 82-second spot required a turnaround of less than nine weeks. NDigitec developed the script with its internal creative team which required four weeks of preproduction. The film was shot over two days in Dubai on both physical sets and green screen. NDigitec’s postproduction and CGI team then dedicated over 40 artists to create the spot in just five weeks of post, including 3D animation of dinosaurs and Marvel superheroes, 2D animation, 3D set replacements and physical effects.

“Every shot is a VFX shot,” says VFX Supervisor Eyad Arabi. “This production really pushed things to the limit. Working with global brands such as Marvel and CN was a great privilege, and collaborating with their creative departments was inspiring. We got to create the story where many of these epic characters come to Dubai for the very first time.”

Developing the film to appeal to the diverse concerns of each major brand required extreme attention to detail. For example, although the Marvel characters of Iron Man and the Hulk are all from one art guideline set with detailed references, all the assets had to be developed, built and animated from scratch by NDigitec.

“These kinds of projects are the reason many of us got into creating animation and VFX in the first place,” says Arabi.

Nesma Water and Energy have been awarded the Industrial Valley Phase 3 Parcel C Infrastructure Works project, one of the largest infrastructure contracts offered to date by King Abdullah Economic City.

The company plans to complete the project within 500 days.

Koncar Wins the Gold Medal for its... 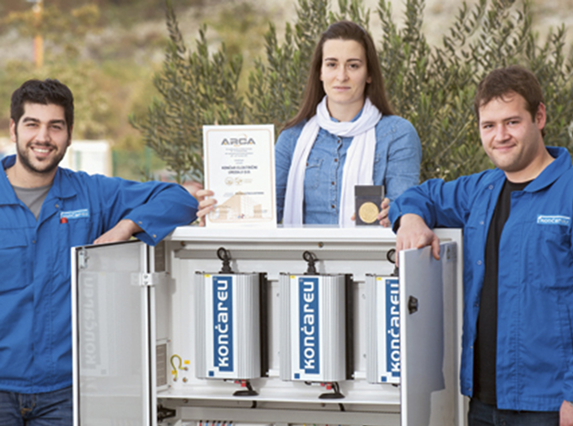 Koncar Wins the Gold Medal for its Solar Power-Plant

Dec 2016
Koncar Electrical Equipment won the gold medal in the 2016 International Exhibition of Inventions held in Zagreb, Croatia.
Koncar developed a standardized solar power-plant that is accessible to both households and industrial users. The products are known as “Koncar Green Home Energy (GHE)” and “Koncar Green Business Energy (GBE)”.
The annual International Exhibition of Inventions presents innovations, new products and technologies from the fields of mechanical engineering, electrical engineering, IT, physics, mechatronics, chemistry, biology and medicine in addition to other natural and technical fields.
Koncar’s solar power plants project is considered to be a relevant new innovation both in Croatia and Europe due to the number of governmental incentives for renewable energy. 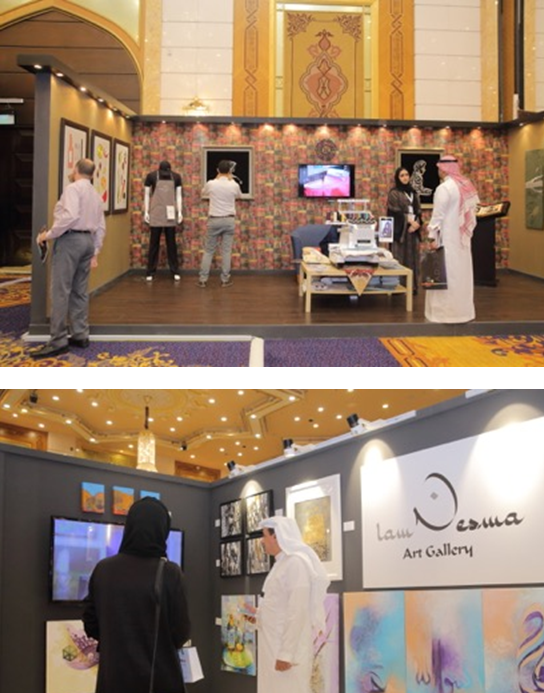 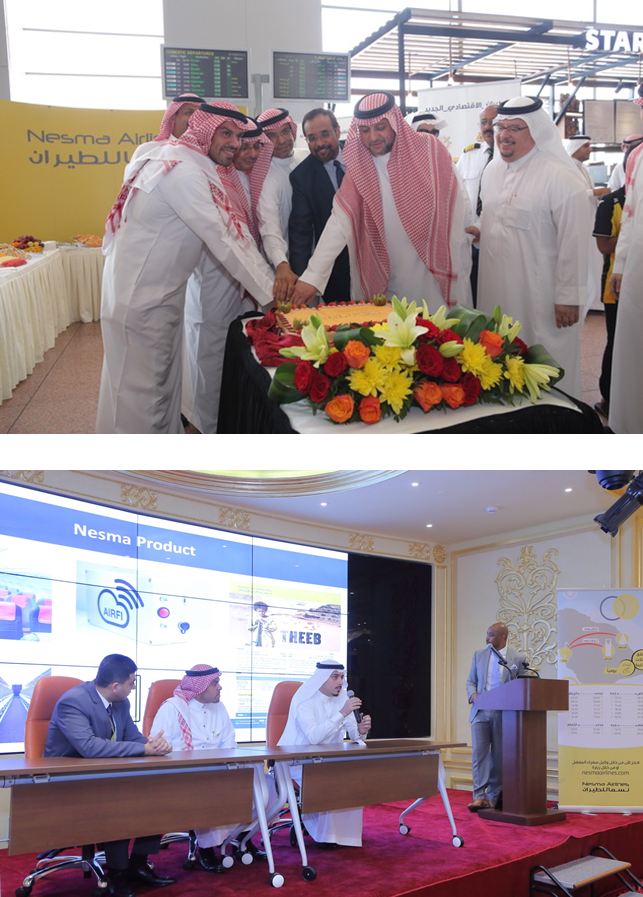 Dec 2016
Nesma Airlines celebrated this month the inauguration of its new domestic round-trip flights from Jeddah to Riyadh, Dammam and Hail.
Director General of King Abdulaziz International Airport, Engineer Abdullah Al-Rimi, celebrated with Nesma Airlines and commented, “King Abdulaziz International Airport is witnessing an increase in demand from both domestic and international airline companies; Nesma is supporting domestic destinations like Riyadh and Dammam in addition to connecting Jeddah Airport to Hail Airport according to the General Authority of Civil Aviation plan.”
The new Jeddah routes are based on a partnership with Nesma Airlines and Al-Tayyar Group, using leased aircraft from Small Planet Airlines. On flights originating from Jeddah, Nesma Airlines offers a new experience with aircraft which are equipped with hot and cold beverages, meals and snacks, in addition to a wireless in-flight entertainment system available on smart devices.
Nesma Airlines has six round-trip flights daily from Jeddah to Riyadh, two round-trip flights daily from Jeddah to Dammam and one round-trip from Jeddah to Hail.
During the launch campaign, Nesma Airlines provided free seminars for travel agencies and agents to introduce the new Jeddah routes. The events took place in Jeddah, Riyadh and Dammam and focused on the ease of ticket sales and availability of seating for the new flights.
In October this year Nesma Airlines launched domestic flight services with a central hub at Hail Regional Airport to various locations in the Kingdom which currently include Tabuk, Qaisumah, Turaif and Medina with future flights from Hail to include Rafha, Arar, Qurayyat, Al Jouf, Riyadh, Dammam and Qassim. All flights are flying with the airline’s ATR 72-600 aircraft.
Regarding the airlines’ fleet, CEO of Nesma Airlines, Faisal Al-Turki, said, “Nesma Airlines is planning to increase its fleet during the next three years to include six ATR72-600 aircraft for flights operating in the northern cities, and one Airbus A319 and one Airbus A320 for flights operating from Hail Airport to major cities. Another A320 aircraft along with two Airbus A321s will operate commercial flights between Jeddah-Riyadh and Jeddah-Dammam.”